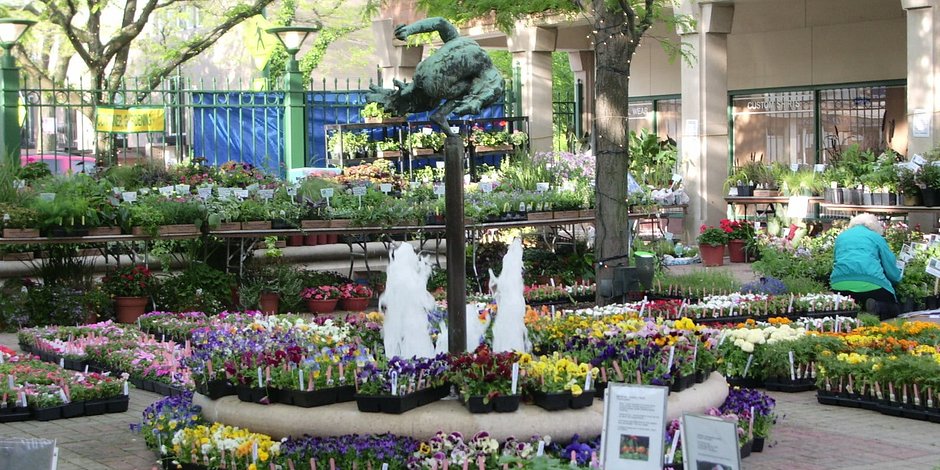 History of the Garden Fair

"The Garden Fair has a long history in the neighborhoods of Hyde Park and Kenwood, dating back to May of 1959. The Fair's founders included the respected environmental activist and Hyde Park Herald editor Lee Botts, along with Helga Sinaiko, Sophie Rudin and Mollie Salmon. The Fair began during the period of urban renewal in Hyde Park, when the founders thought that gardening should be promoted to go along with the upgrading of houses and the community in general. As there were no nearby garden centers, the Fair started as a small plant exchange among avid gardeners. Since this policy excluded people with nothing to exchange, the Fair quickly shifted to seeking out plants from far-flung suppliers in the rural and ex-urban distance and bringing them back to the neighborhood. By the early 1970s, the Fair had expanded to provide a wide variety of plants. The Garden Fair grew to such proportions that the Committee members had trouble stocking enough material for two days of selling. By 1977 a system of captains for each horticultural department was established because the work of ordering, setting up, pricing and inventorying was so large. Early on, the small profit that the Fair made was turned over to the Hyde-Park Kenwood Community Conference. But in 1971 the Committee began keeping some of the funds raised by the Fair to promote gardening in the neighborhood, whether by education or beautification. Since then, the Committee has planted many flowers throughout Hyde Park, provided classroom teachers grants for horticultural projects, given lectures at the Hyde Park YMCA, the Neighborhood Club and the Coop, and helped organize garden walks. Currently, committee members continue to donate their time, and organize not only the large annual community fairs, but also plant, design, and maintain several neighborhood gardens and sidewalk planters along community streets. The Committee also donates plants to area churches, synagogues, hospitals, schools, and other institutions."